‘Brommon Bespoke’ is a fashion house which specializes in the making of quality hand-made Italian suits for men and has been in existence in Ghana since January 2014.

Its new and plush showroom was recently opened in cantonments, Accra, with the aim of making it easy for men who appreciate quality and class to have access to nothing but well crafted suits. Indeed at Brommon, the word ‘bespoke’ is brought to life since every suit has been well tailored to fit every occasion.

Kweku Boateng Akuoko, The CEO of Brommon Bespoke was born in 1983 and raised in Ghana. Growing up in a family of six in Mampong, an outskirt of Kumasi in the Ashanti Region, Kweku always aspired to work in the fashion industry. He lived with his father Mr. Samuel Akuoko, a teacher, and four other siblings. 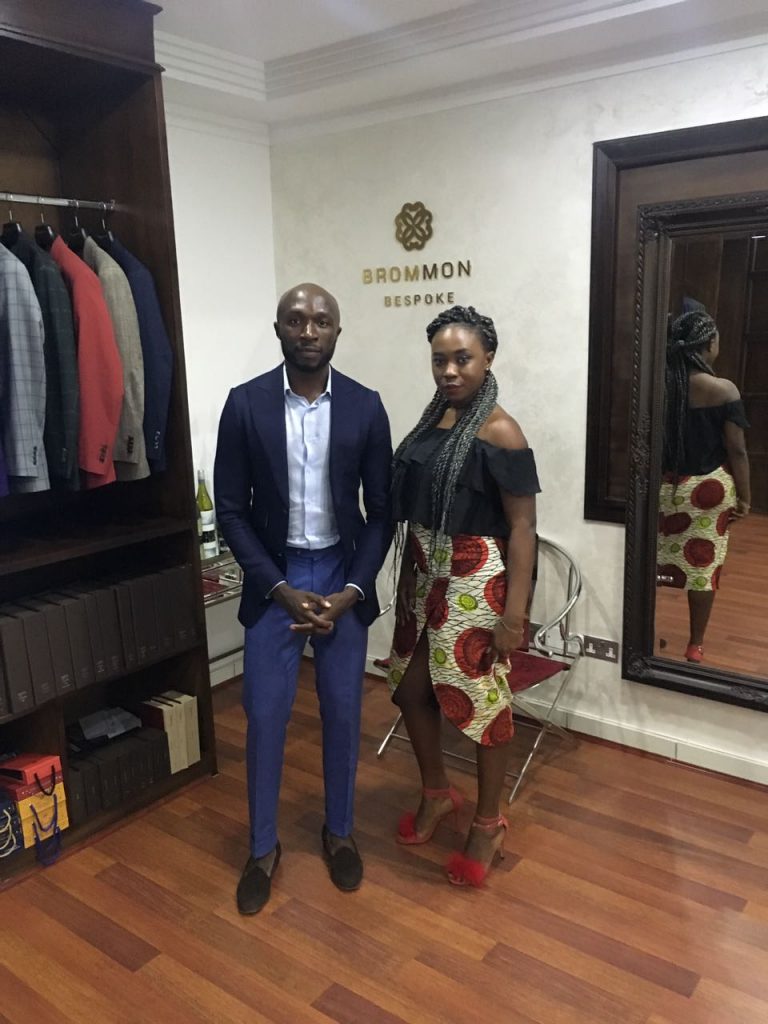 In his words, “my mother left the shores of Ghana to the UK when I was only two (2) years of age and that was the last time I saw her till I later joined her in UK. My father taught in Mampong, where I was based with my two brothers and sisters. I had my elementary and primary education at Mampong Methodist primary and fortunately, my father ended up becoming my primary six teacher. He was a strict disciplinarian who always ensured that I focused on nothing but my books. So I missed out greatly on the typical childhood fun and excitement. My family was of an average class, nothing rosy; there was no such thing as being born with a ‘silver spoon’ because my father instilled in me the principles of fighting for my own and on my own. Each day after school, I would fetch my metallic basket, pack it with ice water, which was then called ‘panyin di panyin’ and set off to sell on the streets of Mampong. My friends would usually tease and laugh whenever they saw me and that was very painful to bear. I asked myself why I couldn’t be like them and wondered when it was all going to end but this continued for six (6) years. Back in school, I was nicknamed ‘Pozo Hayes’ because I had a chronic limp as a result of fractured ankle.”

Kweku later left the shores of Ghana to join his mother in the UK where he furthered his education. He had his secondary education at Homerton boys’ school and later went to Hackney College where he studied computing but after a year and a half into the course, he abandoned college. To Kweku, growing up was tough and mostly characterized by hustling. He is grateful to his father for his guidance because it definitely ignited the passion in him to pursue his dreams and ambitions.

In the UK, Kweku worked with top brands like Alexander Macqueen before moving to Ghana to set the Brommon dream in motion.

“A lot of doors have been shut in my face”, he said, “I faced massive rejection in the days where I had no showroom or an office and had to transact my business from suitcases and trunks of rented cars. I nearly went out of business at a point because I had placed orders for some suits and had no money to pay for them. I realized that not everyone understood the Brommon brand but the few people who did stood by me and today, the rest is history. I have been able to create a high profile brand which produces suits of great quality across the nation and if you love Brommon it signifies that you have good taste.”

Brommon Bespoke can boast of a high profile Clientele including top officials like Bola ray, CEO of EIB Network, retired footballer and former captain of the black stars Steven Appiah and a host of lawyers and real estate moguls who he termed as “anonymous”.

With regards to entertainment is the biggest fan of Bola ray and Berla mundi basically because of their professionalism in their field of work and he loves the color brown because of how easy it is to mix and match with other colors and also because it represents the skin tone of African women. When not at the office, he would be seen hanging out at the plush Kempinski hotel.

Kweku is separated from his wife with whom he had two beautiful daughters, Reese and Raven.

“I am a strong educationist but I do not believe that it is the only key to success. That’s why God blessed each and every one of us with special talents which can also be used as another way to achieve success.”

When asked what the meaning of Brommon was he answered, “Well… it doesn’t have a specific meaning because it was just made up but whenever I’m asked I simply say; BRO- for brothers (men), M- for making, MON- for money. As you can tell, the name itself screams and offers luxury at the same time.”

He would like to be remembered as the guy who came from selling ice water on the streets of Mampong to making a huge change in the fashion industry in Ghana and across the globe.

The Ambitious walking Mannequin, as I would describe him, owes his success to God and his father for keeping him focused on his dreams.

Click on audio to enjoy the full and detailed interview.