B4Bonah is the winner of Live FM’s Artiste of the Month for August.

He polled 9, 316 out of 20, 479 votes after a week of voting on livefmghana.com, beating competition from King Promise, Stonebwoy, Feli Nuna, Shatta Wale, Darko Vibes, Magnom, Kidi and Ebony.

The ‘Dear God‘ act will be interviewed on Live FM’s morning show Live Breakfast Club on Wednesday, September 6, 2017 at 7:30am by Jay Foley and Jeremie.

He will be given a plaque, and also a promotional package on the Adabraka-based station. The package includes a 4-minute audio documentary about himself and his music, a 70 seconds B4bonah music mashup sweeper and a headlining concert powered by Live FM. 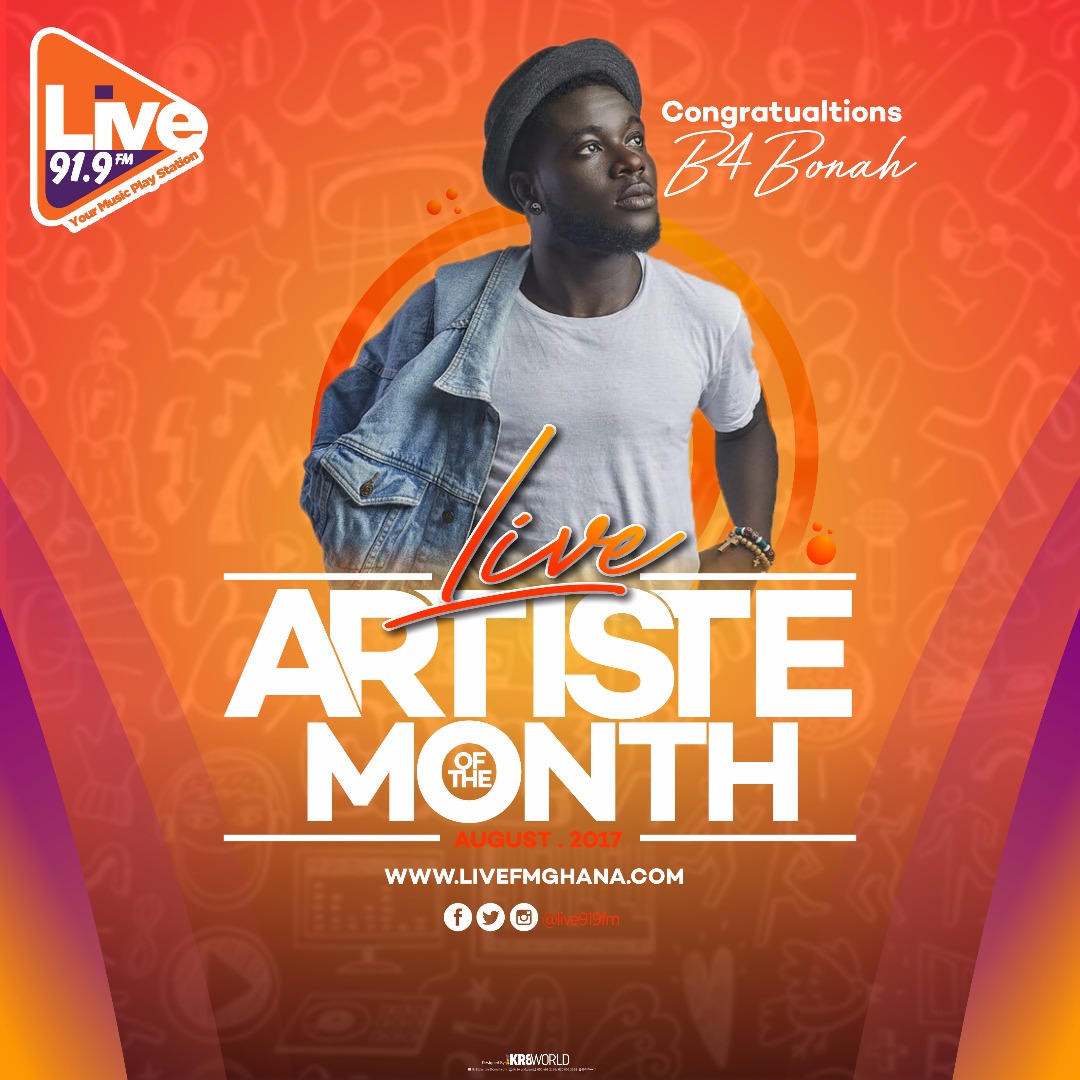 Live FM Artiste of the Month is another instalment of the hugely popular GH Wednesday Live on air delight a year after its inception by Ghana’s favourite youth brand.

The artistes up for contention are selected based on a number of factors including their influence on the Ghanaian music scene with their distinct sound, on-air and online buzz about a single, album or mixtape, and also international impact, performing at festivals or gaining nominations at international award schemes during the time under review (four weeks prior to the selection).

The winner will have his or her works promoted extensively and a headline performance at a show powered by the Adabraka-based station.

“Live Artiste of the Month is an extension of GH Wednesday Live, our initiative to support the craft of Ghanaian artistes. We want to celebrate them for their trend-setting, creative and innovative abilities. The initiative would also help give upcoming artistes the needed commercial buzz, and also a breadth of fresh air for the music industry.”

LIVE FM and its presenters are credited with providing a platform for upcoming artistes, and also supporting the craft of established acts. The station’s programming and events is testament to its dedication to the growth of the Ghanaian music industry.

A successful story that started in May 2015, LIVE FM has grown to become Ghana’s best testament of what youthful exuberance when restricted in creativity can do, and the nation’s most exciting youth brand with a large following.

Foley and Gyan led the station’s extensive coverage of the 2016 Black Entertainment Television(BET) Awards as the only Ghanaian Media Partner after a deal with organizers, Viacom International Media Networks.

In the same year, a deal was reached with TRACE, leading Lifestyle and entertainment media organization. The two bodies agreed to tap into their existing strengths to provide compelling content that sits at the heart of Africa’s ever growing media and entertainment landscape.