How the former college party promoter took a calculated risk to become West Africa’s next star.

When Mr. Eazi returned to his native Nigeria from Kumasi, Ghana, two years ago, it wasn’t to chase a dream of being a successful music artist. In fact, he was trying to get away from music in order to make a practical living for himself—one that didn’t depend on hanging in clubs.

“I thought it was a gamble because in the African system, there is no proper setup for distribution of African music or promotion of African music,” the 25-year-old Afrobeats artist tells me over the phone from Accra. “How you get your music out in Nigeria and Ghana? You go pay the radio station huge sums of money, pay TV stations to play your video, and you’re not even sure if it’s a good investment. To me, it was like going to the casino and throwing away money.”

That system didn’t work for Eazi. Due to his time as a party promoter at Kwame Nkrumah University of Science and Technology in Kumasi, he knew a bit about what audiences were looking for. Stepping away was hardly a crisis for him. On the phone, he calmly speaks as someone with plenty of poise to make a taxing decision. 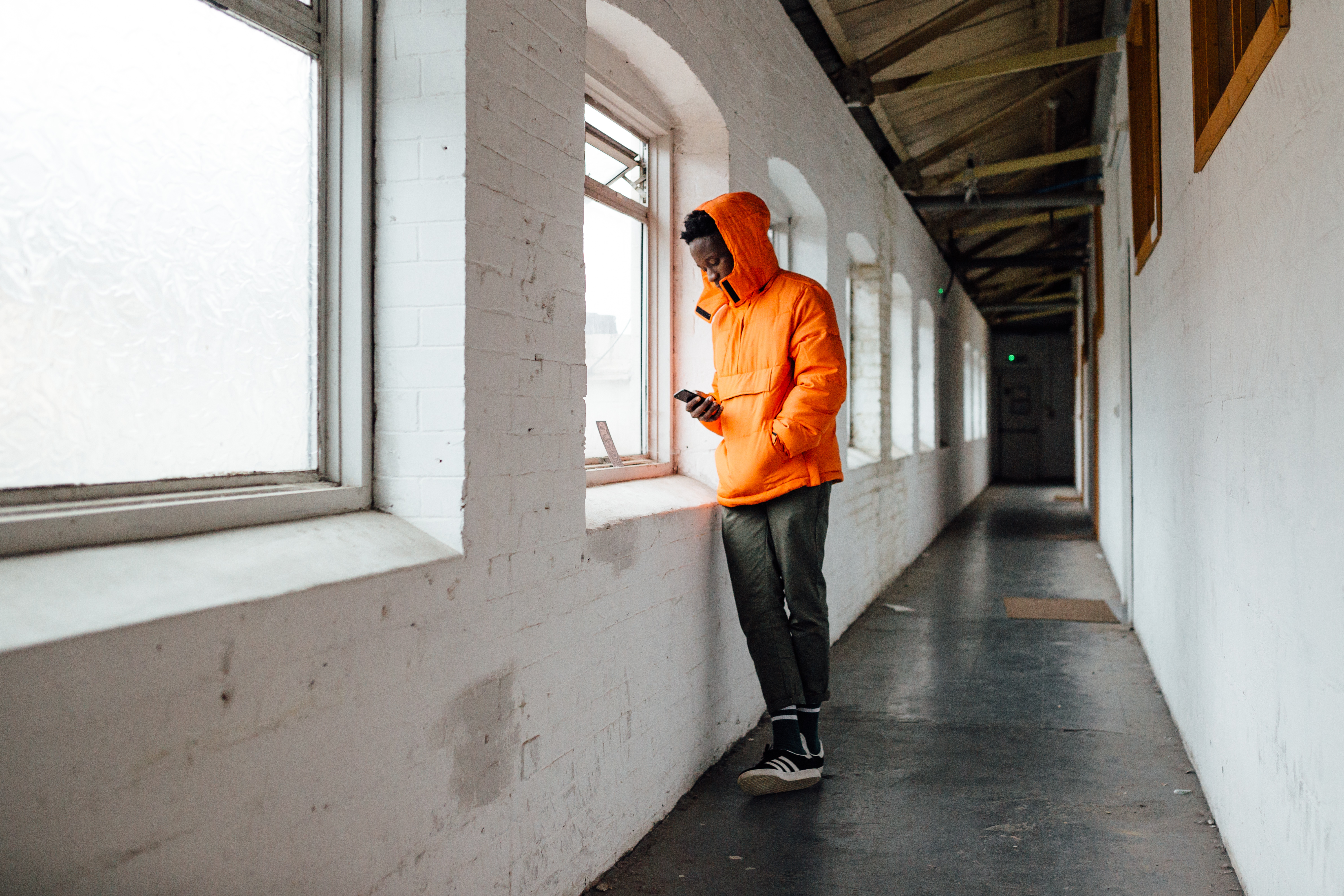 “I was always around and helping emerging artists because they wanted to get on my shows for free just to show themselves,” he remembers. He’d pay them, but if anything that kept his own ambitions in check. He adds, “I didn’t used to pay them a lot of money. I knew how much I booked them for.”

Being a promoter gave Mr. Eazi access to the scene, and he booked some of West Africa’s biggest artists, such as Ghana’s Sarkodie and R2Bees and Nigeria’s Wande Coal. That connection would occasionally lead him to the studios of artists vying for his attention. “One of those days I went to a studio and a guy told me I should jump on this record, so I did it,” he proudly recalls. “It became a very popular record at school because it was good and I was already popular from being a promo guy and party boy.” That song—”My Life” a minimally produced Afrobeats tune—took off, and by sheer circumstance, Mr. Eazi was unofficially born that day.

The Afrobeats music that Mr. Eazi makes is the ascendent contemporary West African pop genre, born out of 70s, Fela Kuti-headed, jazz-infused Afrobeat (with no “s”) and merging those sounds with elements of house music, dancehall, soca, and hip-hop. As Eazi’s first attempt at contributing to the genre gained more traction around campus, he put a pause on partying and started hitting the studio on Friday nights after class. Still, the social currency his new music provided couldn’t prevent him from making the move back to Nigeria. “I’m not gonna lie, I disrespected the music,” he tells me—his deep voice and speedy delivery regularly punctuated by “uh”s. “And because of how easy I made the music, you know, I’d just go to the studio, and I could make like ten songs in one day. Then I wouldn’t go for two months, go back and make another five songs. So I didn’t really put value on it and I wasn’t pushing my music. For me, it was just a hobby.” Many of the most popular Afrobeats artists—such as Wizkid, Davido, and Patoranking—wield an upbeat vocal tempo, but Eazi’s brand is a direct contrast to his contemporaries. He uses his calming, deep hum of a voice to give ballad-like qualities to dance-forward production. As a result, his music has an R&B-like quality reminiscent of Beres Hammond, Gregory Isaacs, and others who took on reggae in the 70s to create the subgenre of lovers rock. In conversation, Eazi has a modest confidence; everything he says feels like it’s been pondered on many times before our talk. That kind of calculation has almost certainly contributed to the success he’s seen up to this point, which has all come without releasing a proper project and which makes the case for his eventual stardom even stronger.

Born Ajibade Tosin in Port Harcourt—the largest city in Rivers State, Nigeria—Mr. Eazi grew up with strong examples of entrepreneurship in his life. His mother owned a small business, and his father, a pilot, ran his own private aviation consulting practice. Aside from a short stint in the choir at his primary school in Lagos, Eazi had no musical background to speak of. At 16, inspired by distant maternal relatives in Ghana, he moved from Port Harcourt to Kumasi to prepare for college, and, once at school, he studied mechanical engineering. Although he flirted with music at Kwame Nkrumah, his business acumen led Eazi back to Nigeria, where he started his own e-commerce platform for trading stocks in Lagos at 23.

Preoccupied with handling his company, Eazi fell out of music quite easily. But, within two months of the move in late 2014, he got a direct message on Twitter from Juls, a UK-based Ghanaian producer and DJ who had gotten his hands on a few songs Eazi recorded while still in Kumasi. Juls reached out to collaborate, but Eazi stalled, for a long time unable to even find the files from his old songs. When he finally sent vocals to Juls, the producer made a new beat and proper artwork to what would become Mr. Eazi’s first single, “Bankulize,” featuring Ghanaian hip-life artist Poppy Kojo.

“The day Juls put it out, I was so busy at my startup, I wasn’t even on Twitter,” Eazi remembers. “I come on Twitter later in the night and I had so many tweets. So after that, I started going back to the studio and would send everything I recorded to Juls.” After Juls dropped the track in November of 2014, it began to rack up plays, and its video, which was released in January of this year, now has over 2 million views. That’s no flash in the pan, though; including “Bankulize,” five videos Eazi released this year have eclipsed the 1 million view mark—”Skintight,” “Hollup,”“Anointing,” and “Dance For Me” being the others. In Ghana in December 2015, Eazi opened up for Ghanaian star Sarkdoie, whom Eazi had previously booked during his time as a promoter. It was the biggest moment of his career up to that point.

“Sarkodie asked me to perform at his gig, so I get there, got on stage and everybody started screaming,” he says, still sounding amazed as he walks me through the event. “That’s when it really hit me that, maybe I’m onto something. From that day, I thought, let’s put some time and attention to the music.” The next day, Eazi, who was still operating his startup full time, and his team started tracking their streams and sales. They realized that the bulk of both was coming from the UK, partly due to Juls’s promotion of their collaborations. They set up a four-show UK tour for July of this year. Afterward, Eazi entrusted a friend to run his startup, started setting up interviews to promote his music, and finally put up a website.

Over the past year, Afrobeats has garnered more attention in North America than ever before, most notably when Nigeria’s Wizkid—Afrobeats’ biggest artist—made an appearance on Drake’s hit single “One Dance” in April of this year. Since its release, it has become the most streamed song of all time on Spotify, totaling over 880 million plays—a sure win for Afrobeats and African music, in general. Last year, another Nigerian Afrobeats star, Davido, collaborated with Meek Mill for his song, “Fans Mi,” and this year he released a single with Tinashe called “How Long” for his Son of Mercy EP . Both artists signed record deals with Sony Music subsidiary RCA Records this year. Wizkid’s deal was thebiggest ever signed by an African artist. 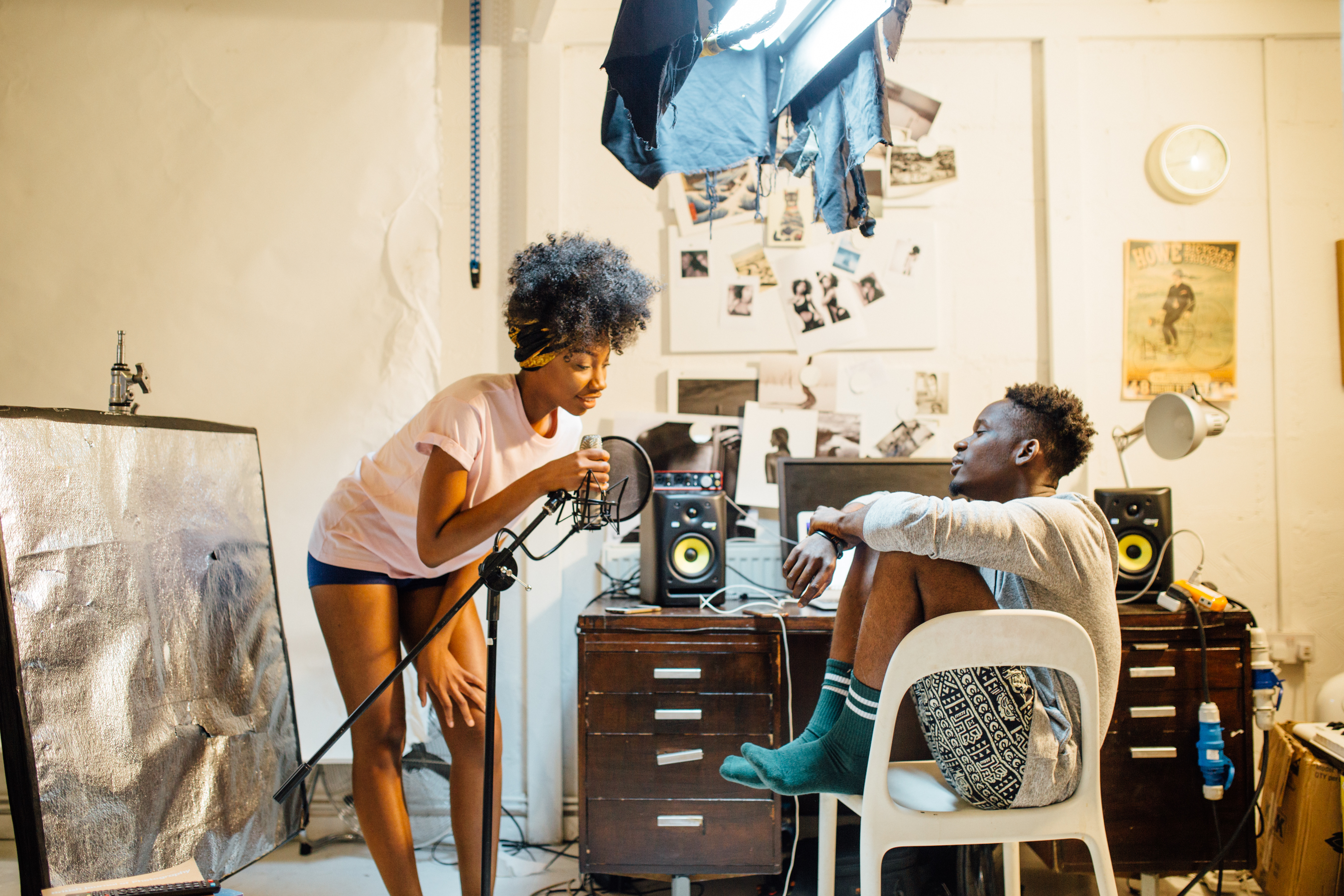 It’s a pivotal time in black music around the world, as the rise in popularity of Afrobeats is mirrored by the mainstream resurgence of Caribbean music in America. At the same time, since the shooting death of Trayvon Martin, there has been a boost in awareness of police violence and injustices against black Americans, and a developing signal seems to be crying across much of the global African diaspora that is using music to mend severed connections. It’s similar to what happened in the 1960s, when artists like Nigeria’s Fela Kuti, Jamaica’s Bob Marley, and America’s Nina Simone used their music to narrate the social challenges that blacks were facing in their respective countries. At the time, nations in Africa and the Caribbean were gaining their independence from European powers, while black Americans were fighting to gain their civil rights. The music being made in each of these countries tapped into a broader narrative of struggle that then helped each of these artists find traction among international audiences. It’s a phenomenon that Mr. Eazi is aware of, but he’s still keeping his guard up.

“Right now, because Drake had a song with Wizkid, people will start listening to other songs that have that kind of sound,” Eazi tells me, his tone giving off more passion and urgency than any other point in our conversation. “On the politics side, it’s good because now the dancehall genre and the Afrobeats genre are getting a wider exposure, wider access, wider fan base. At the same time, I feel it’s now the responsibility of African artists to maintain their originality and make sure they are not lost in the whole craze and export because the moment this sound is hijacked and an African artist starts to sound like Drake, then there’s nothing we have to give anymore.”

Cautious of being a victim of swift, under-the-nose acculturation, Eazi decided to put his debut album on hold in order to release a mixtape that features him exclusively performing indigenous West African music called Accra to Lagos,which he recently announced would be released on December 1. The project’s inspiration came over the summer when, after his string of shows in the UK and getting offers to collaborate with Western artists, Eazi realized that people were not genuinely interested in what he had to offer. 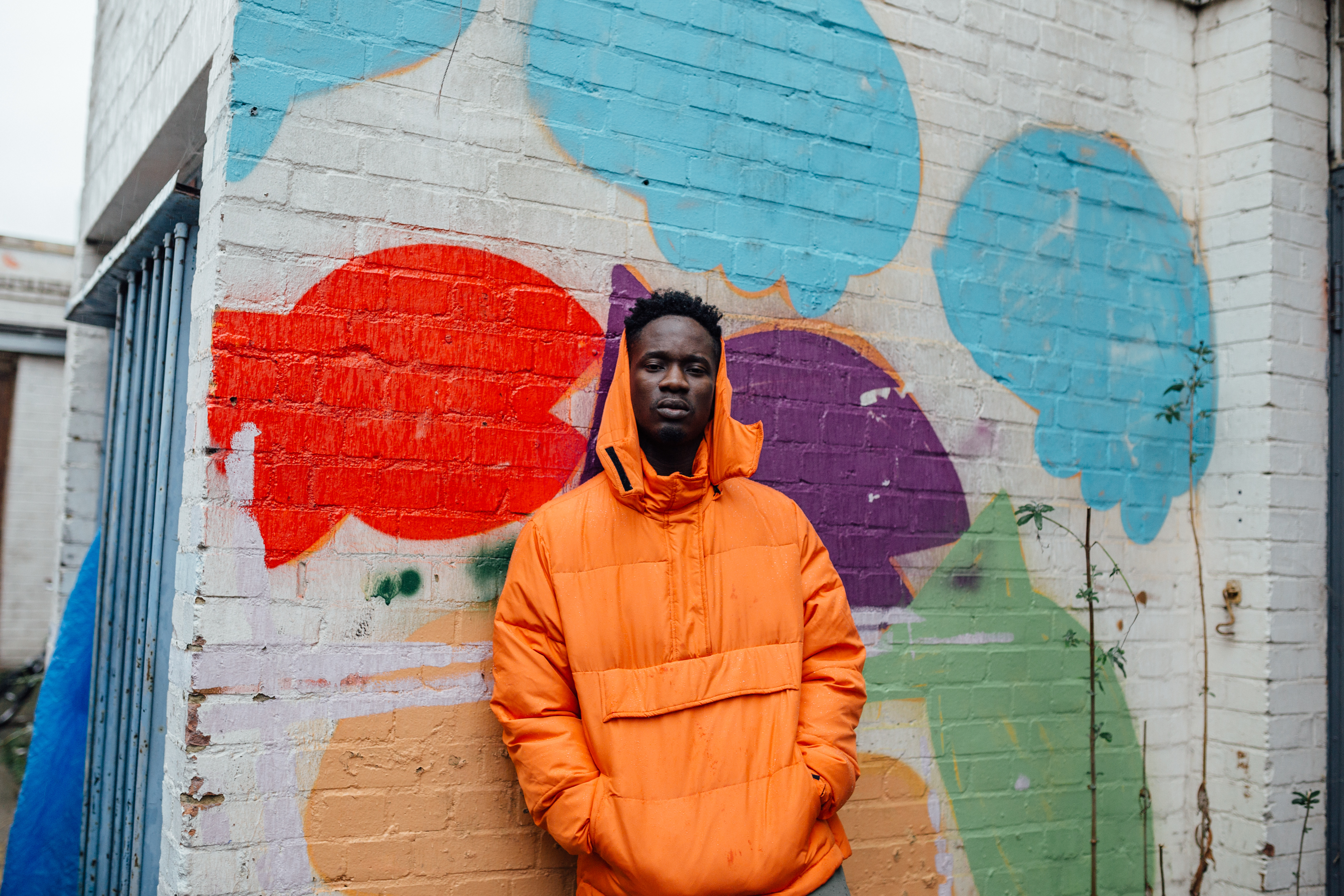 “Most of the musicians coming to work with me are not coming to work with me to project my culture or project my sound,” he says. “They’re coming to change my sound to sound like what they think the rest of the world wants. Mr. Eazi is not Tory Lanez. Mr. Eazi is not Bryson Tiller. I should be able to have my heart. I should be able to have a video where we’re in an African farm and show the cows.”

A a good chunk of Mr. Eazi’s listeners may not understand the lyrics in Accra to Lagos, but his mission transcends language barriers. “It’s education at the end of the day. Even though, I feel that if every artist is on the same page, it’s gonna be an interesting time because there are a lot of people of African descent around the world,” he pauses to think. “I think it’s over 1 billion. There’s no reason why we shouldn’t be able to reach out to a billion people around the world with the culture and the music to bridge that gap that has been severed by slavery and export.”