Born Emmanuel Nii Adom Quaye, he gained national attention for his role in the critically-acclaimed movie ‘Beasts of No Nation’ last year, playing the character with a stern look throughout the movie.

Deborah Vanessa, Adwoa Smart, Medikal, Roselyn Ngissah and comedian Hogan are some of other actors in the upcoming production.

A press conference and dinner, which will also serve as a pre-production launch will be held on August 20, 2016 at The Chop Bar, A & C Shopping Mall, East Legon.

SHATTA TV is a dramatic comedy TV series which is set to dominate an era where Mexican, Indian and Spanish soap operas have become an inevitable spice on Ghanaian/African TV screens. 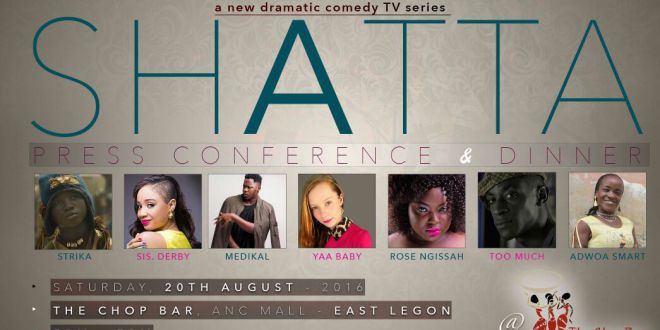 The title (SHATTA) raises a lot of striking controversies as to whether or not it is affiliated with Ghanaian dance-hall artist “Shatta Wale”. Moreover, a newbie TV series “Cocoa Brown” features his wife and so, could it be that he and his family are developing some love for “acting”?, that is if it’s revealed he is a part of the “SHATTA” television series.

Chloe Rose, an American TV producer and the Executive Producer of SHATTA TV series confirmed on twitter, a Press Conference and Dinner to be held as a Pre-Production launch of the TV series on Saturday 20th August at THE CHOP BAR – AnC Shopping Mall, East Legon.

Producer and director of the series, Mr. Kofi Awuah has a great track record and he is expected to serve Ghanaians with a “co-equal” to top-of-the-chart series like Game of Thrones, Empire, An African City Etc.