In a post today, Unibank said it wished Ayew, who is its brand ambassador, well as he begins another journey in his football career. 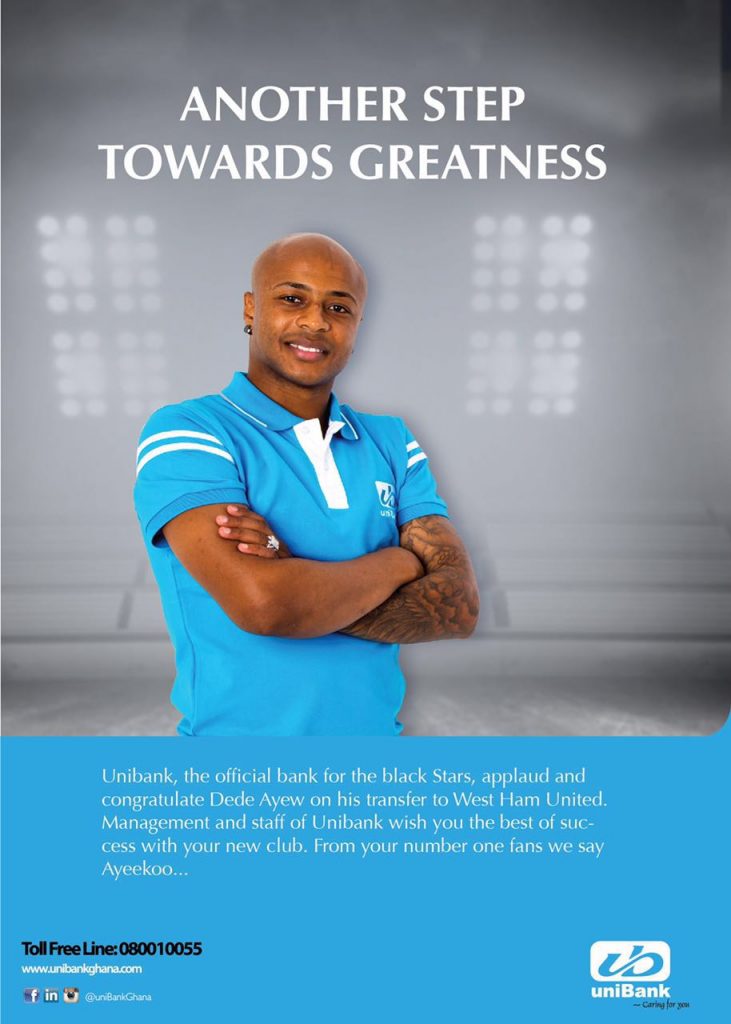 Ayew completed a move to West Ham United on Monday in a club record fee of £20.5million.

The versatile striker/winger/attacking midfielder joins the Hammers on a three-year contract, with an additional two-year option, on the back of an exceptional debut Premier League season with Swansea City.

Boasting an equally impressive spell at Marseille on his CV, where he played alongside Dimitri Payet, along with goals at four major international tournaments for the Black Stars, the 26-year-old is now set to shine on the London Stadium stage.

He said: “I am very proud and happy to be at this magnificent Club. I am happy to be playing for these fans and I hope to make the people very happy here. 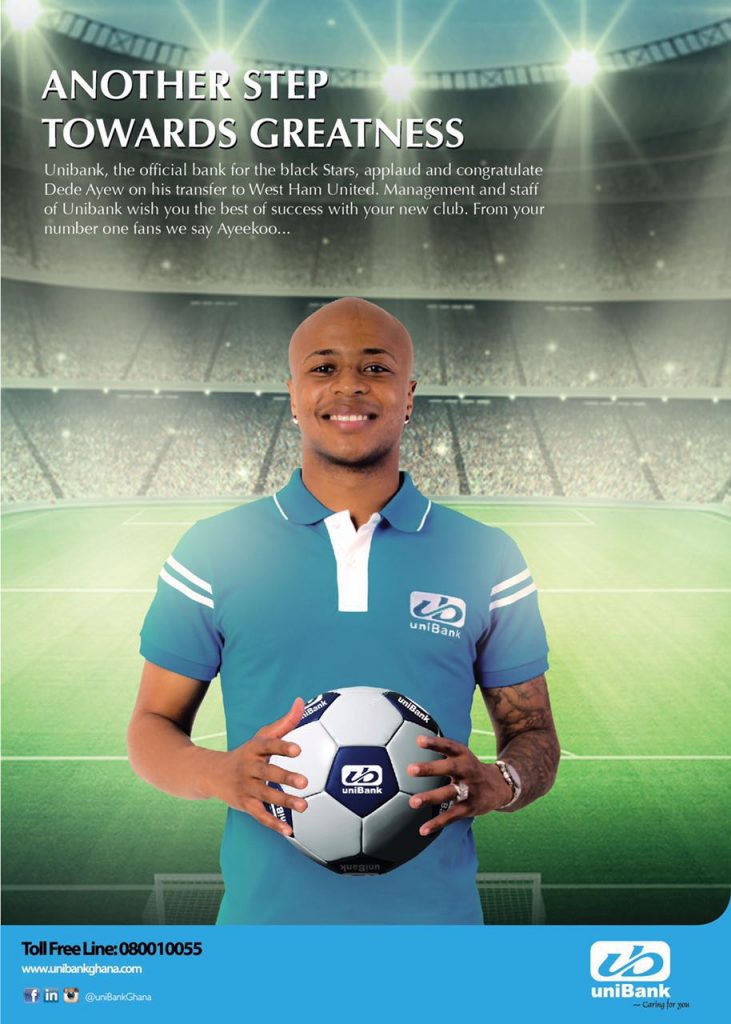 “The Club have a lot of ambition and have a great manager. They want to become a bigger Club every year and with the new Stadium and a new training ground, you can feel they are moving onto another level and I want to be part of this project.

“I want to train hard, do my job and show that I deserve to play for West Ham United. I want to give back to the manager and the fans the confidence they are showing me.”

Born in Seclin, northern France, in December 1989, Ayew had spells in Germany and Ghana as a youngster before making his professional breakthrough at Marseille – the same club that his father Abedi Pele starred for in the late 1980s and early 1990s.

He debuted for Marseille in 2007, and after spending time on loan with Lorient and Arles-Avignon, established himself as a regular on the scoresheet at Stade Velodrome from 2010 onwards.

In all, he scored 60 goals in 202 games for L’OM, many of them assisted by Payet, winning the Coupe de la Ligue and the Trophee des Champions twice apiece during his time in France.

An impressive 16 goals in 2011/12 included four in just nine European appearances and he has hit double figures in five of his last six campaigns.

Included in that is his impressive Premier League bow, where he scored at a rate of better than one every three games for the Swans, with his goals steering the Welsh club away from danger and to another year of Premier League safety.

Internationally Ayew has enjoyed great success, featuring for Ghana in four major tournaments – and scoring in all four.

He netted twice at the 2014 FIFA World Cup and followed that with three goals at the 2015 Africa Cup of Nations to claim that tournament’s Golden Boot.

A two-time Africa Cup of Nations runner-up and FIFA U20 World Cup winner, Ayew has scored eleven goals in 67 senior caps for the Black Stars.

Ayew became a UniBank ambassador this year following a deal in June.

In an official signing ceremony, the bank said he was he expected to “use his image and value as a player to help boost the image of the indigenous bank outside the shores of Ghana.”Chief Operating Officer of UniBank, Dr Kwabena Duffuor Jnr, added they’re looking forward to a fruitful relationship with the former Swansea City player.